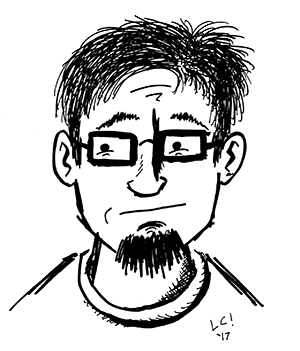 Leighton Connor is a writer, artist, cartoonist, and public school teacher. He and his wife, superstar priest Alice Connor, live in Cincinnati with two children, and a dog. Leighton is the author of the Ross Fulton series of short stories, collected in Gaming the System, and co-author of the Herrick Agency series. He is currently serializing his novel Armistice Hawkins and the New Architects of Creation through Kindle Vella. He has illustrated a few books and has drawn numerous comics, including Laser Brigade, Fuzzball & Scuzzball, and Lightning Man. With his daughter Abi he is the co-creator of the comic book series The Electric Team. He is the co-founder of Hex Games and the author or co-author of numerous RPG books, including Akashic Titan, Laser Ponies, Hobomancer, Project 8Ball, Save Dave!, and Leopard Women of Venus. He enjoys BLTs.