Here’s a list of my books that are currently available for purchase.

Armistice Hawkins and the New Architects of Creation – I am currently serializing this novel via Kindle Vella. Sarah left behind her comfortable life in Kentucky and flew to New York for a new job. Her employer is Armistice Hawkins, the brilliant scientist, martial artist, billionaire, bass player, and globe-trotting man of mystery who has dedicated his life to staving off the collapse of human civilization. Now Sarah, Armistice, and the others must face their most apocalyptic threat yet, an insidious cabal determined to rewrite reality itself! The first three episodes are free so why not check it out?
(Illustration by James Hornsby) 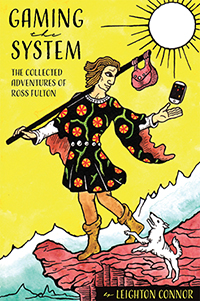 Gaming the System: The Collected Adventures of Ross Fulton – Ted knocks on an apartment door in a small town in Ohio, looking for the legendary occult detective Ross Fulton. Instead he finds a bitter disaster of a man who lives in squalor and plays video games all day. Together the two of them tackle a string of bizarre cases, including a ghost in the kitchenware aisle of a department store, an interdimensional invasion at America’s largest gaming convention, and a murder amidst a charming group of apocalyptic cultists. But which is the true Ross Fulton, the brilliant detective or the lazy, selfish jerk? Both, it turns out. Gaming the System collects five thrilling adventures of Ross Fulton: the short stories “The Rosamund Trap,” “The Flaxman’s Anomaly,” and “The Shattered Soul,” and the novellas The MarmiCon Conundrum and The Nihilist’s Curse. Taken together, they tell the definitive story of Ohio’s greatest occult detective.  Order your copy today!
(Cover illustration by Matt Kish)

Hello From Junction City – The first story in the Herrick Agency series! A man in an ugly Hawaiian shirt finds himself in Junction City, Kansas, with no idea who he is. He soon learns that he’s a detective with the Herrick Agency, in town to track down a missing group of teenage artists. But this is no ordinary missing persons case–the artists were captured by something diabolical, a cosmic being powered by electricity and hate, hellbent on enslaving humanity. Written by Leighton Connor, author of the Ross Fulton: Occult Detective series, “Hello from Junction City” is a quirky, pulpy thrill ride. Order yours today! 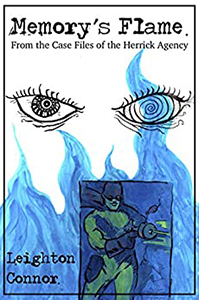 Memory’s Flame (From the Case Files of the Herrick Agency) – Harry Ping lost his memory and quit his job as a detective, but his retirement doesn’t last long–when his neighbor has a terrifying encounter with a woman made of fire, Harry takes the case. As he and his friend Trinket try to uncover the flaming woman’s identity, they discover a connection to the masked crimefighters of World War II. But can Harry figure out what’s going on, when he can’t even come to terms with his own identity? On sale now! 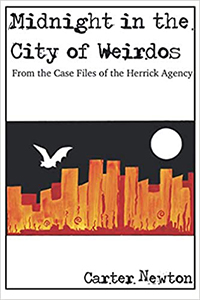 Midnight in the City of Weirdos (From the Case Files of the Herrick Agency), by Carter Newton – I didn’t write this one, but it’s the next story in the Herrick series, and it’s good! Frank is a weirdo—he’s short, he’s got wings, and his hearing is great. He’s made a life for himself in New York, the greatest city in the world, as a lawyer and a detective. When his friend and fellow weirdo Jerry comes looking for help, Frank is reluctant to take the case. And, sure enough, as he investigates this mystery he soon finds himself in the seedy underbelly of the weirdo community, chasing a trail that leads to threats, extortion, and shape-changing cryptid fiends. Will Frank and the agents of the Herrick Detective Agency make it past Midnight in Weirdo City? Get a copy and find out! 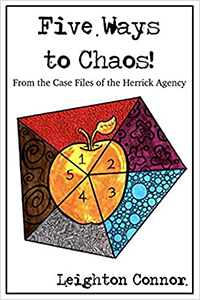 Five Ways to Chaos! (From the Case Files of the Herrick Agency) – Trinket’s got a magic coat, she’s traveled across the country a dozen times, and she’s had the kind of adventures most people only dream about. So why does she have so much anxiety? There’s no time to reflect, because Trinket and her pals from the Herrick Agency are in Cincinnati, on the trail of Joseph Smith’s Seer Stone Spectacles. They’re not the only ones looking for the Spectacles, and to crack this case they’ll have to contend with a heretical Mormon sect, Discordians, crooked cops, the magical artifact black market, Cincinnati chili, and more! Purchase it today! 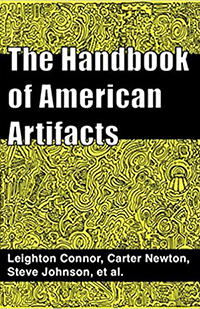 The Handbook of American Artifacts (From the Case Files of the Herrick Agency), by Leighton Connor, Carter Newton, Steve Johnson, Josh Burnett, and Friends – Did you know that an angel wrote a history of the future on a series of silver tablets, and buried them in Alaska? That Thomas Edison designed a machine to communicate with the dead, Ben Franklin built a robot, and Teddy Roosevelt carried a big stick that allowed him to summon an army of moose? Do you know why occultists are willing to pay top dollar for a shard of the plane Buddy Holly died in? You can learn all these things and more in The Handbook of American Artifacts. This volume includes 55 evocative entries describing magical items native to the USA. A detailed timeline, from 1732 to 2412, is also included. This book is not a user’s manual. Instead, we offer these listings up to you as small, glittering pieces of the vast mosaic that is the secret magical history of America. You can buy it here! 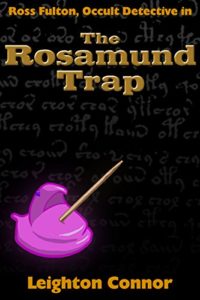 The Rosamund Trap – Ten years ago occult detective Ross Fulton won fame as the man who unraveled the mystery of Tesla’s ghost and saved Chillicothe from the Mothman. Eventually, the mind-blasting horrors of the occult became too much to take, so Ross left it behind and began a career in pizza delivery. But now, Ross’s comfortable life of free pizza and video games is interrupted by a man showing up at his door and begging for help. A girl, Rosamund, has gone missing. Tracking her down will leave to shocking revelations, and a confrontation with Ross’s deadliest enemy . . . but first, he’ll need to hit the drive-through for some tacos. This short story is the first of Ross Fulton’s adventures, and is available on the Kindle. Buy it now on Amazon!
(Cover design and illustration by Josh Burnett) 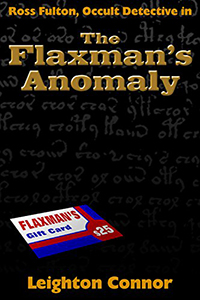 The Flaxman’s Anomaly – In his prime, Ross Fulton solved the Case of the Inverted Pyramid and beat an incubus in a knife fight, but those days are long gone. Now Ross is broke and on the verge of eviction. Fortunately, his assistant Ted has found him a case—there’s a ghost haunting the Flaxman’s department store, and the management will pay to get rid of it. They’ll even throw in some nachos. Ross and Ted must navigate the boundary between the living and the dead, figure out why there’s a ghost at Flaxman’s, and, more importantly, convince it to leave. Buy it now on Amazon! It’s so cheap!
(Cover design and illustration by Josh Burnett) 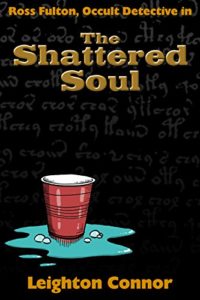 The Shattered Soul – People who know Ross Fulton know that he’s the greatest occult detective in all of southern Ohio. They also know that he’s manipulative, egotistical, and frequently belligerent. But Ross hasn’t been himself lately. He’s losing his memories and his emotions, and becoming a hollow shell of a man, all because of a supernatural attack that’s causing his soul to collapse in upon itself. Now the only people Ross can turn to are his assistant Ted and his ex-girlfriend Sandra. But are they up to the job of saving Ross? And, really, do they want to? Buy it now on Amazon! You won’t regret it!
(Cover design and illustration by Josh Burnett) 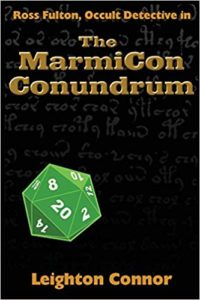 The MarmiCon Conundrum – In his most mind-blowing case yet, occult detective Ross Fulton and his assistant Ted have come to Indianapolis for MarmiCon, the largest gaming convention in the Midwest. Ross and Ted have to track down the elusive Franklin Fletcher, a game designer, con man, and Enochian mage, but they soon learn they’re not the only ones on his trail. Now Ross and Ted must outwit their rival, find Fletcher, and figure out why portals to other worlds are opening up throughout the convention. Plus, there’s the nagging question—what is Gotterdammerung Opus Maximus? Buy it today, you deserve it!
(Cover design and illustration by Josh Burnett) 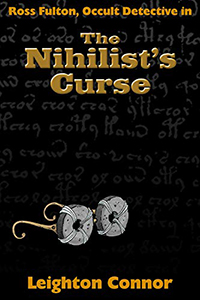 The Nihilist’s Curse – A man is dead, murdered by magic. That makes this a case for Ohio’s premier occult detective, Ross Fulton, and his assistant Ted. Ross and Ted soon learn that none of their suspects are entirely innocent–they are all members of an apocalyptic cult, dedicated to summoning their Dark Lord to wipe out life on Earth. As the investigation spirals out of control, Ted must come face-to-face with his maker, and confront difficult questions about morality, death, and the meaning of life. Go ahead and buy it, you’ll be glad you did.
(Cover design and illustration by Josh Burnett) 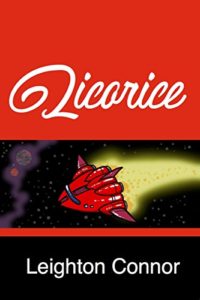 Licorice – In a galaxy where eating is outlawed, a lost ship loaded with 900 teragrams of food has limitless value on the black market. Licorice is the only pilot skilled enough to reach this treasure, but to do so she’ll have to navigate the treacherous terrain of zipspace, fight her way through killer robots, and confront the most painful secrets of her past. It will all be worth it, though, if she can achieve her ultimate goal: the legendary taste sensation know as the bacon cheeseburger. Buy it now on Amazon!
(Cover design and illustration by Josh Burnett)

RAW 111: A Paratactic Mass – Inspired by T.S. Eliot’s “The Wasteland” by way of Jack Kirby’s New Gods, RAW 111 is a cosmological and liturgical odyssey. RAW 111 is an interconnected series of pieces structured like a church service, beginning with an Opening Acclamation and ending with a Dismissal. The text incorporates free verse, prose, haiku, rhyming verse, song lyrics, quotes from comic books, lines from fortune cookies, science fiction, astronomy facts, and more, a mosaic of found text fragments and scraps of meaning that, taken together, form a quasi-coherent whole which ultimately reaches a transcendent crescendo. The text is illustrated throughout by the author. Buy it now on Amazon! 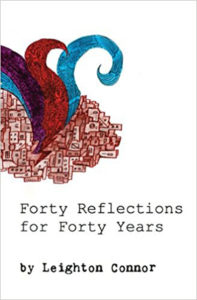 40 Reflections for 40 Years – A micro-memoir, in which I wrote 40 reflections about my life, over the course of 40 days, counting down to my 40th birthday. Order now on Amazon! 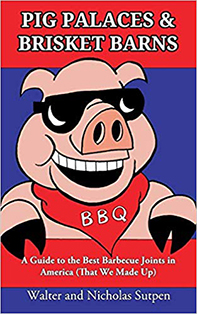 Pig Palaces & Brisket Barns: A Guide to the Best Barbecue Joints in America (That We Made Up) – You may know all the famous barbecue joints of Kansas City and Memphis, but have you ever visited Amoral Abattoir? Pork By the Pound? UnderArby’s? Have you ever sampled the decadent delicacy known as the Bar-B-Cone? No, you haven’t, because technically they don’t exist; but no matter, because this guidebook will tell you everything you need to know about them, and other absurd, esoteric, and idiosyncratic barbecue joints across this great nation. Steve Johnson (Obscure Early Bluesmen Who Never Existed, So You’ve Decided To Run a Role-Playing Game) and Leighton Connor have joined forces to lovingly craft this travelogue of imaginary barbecue joints that is frequently hilarious, usually dumb, and always entertaining. Why not purchase a copy?